The Diffuser has been conceived to increase the benefits of chromotherapy thanks to a play of reflections using a pair of specific glasses.

The Diffuser uses a particular natural crystal fixed on a glass which reproduces the light of the seven colours usually referred to chakras.

This technique is highly recommended to meditate on chakras since it couples the crystal's capacity and the chromotherapy's potentiality.

Each natural crystal is sought carefully and checked to evaluate its pureness and its potentials. Then it is optimized during the cutting process following the golden section. That's why each crystal is always unique of its kind,just as the care we have for each of our customers!

An outline of Crystal therapy

Since the classic era and the Middle Ages our literature is full of evidences concerning the magical employment of stones and we can find the ritual utilisation of particular gems almost in all the traditional cultures all over the world. This widespread use of gems and stones provides a further confirmation of the more and more common idea that, at an inner level, human perceptions can get the same message everywhere.

Except for some simple superstitions, almost all the magic uses of precious stones have been strengthened by the nowadays esoteric interpretation, which sets a link between the stone (including its specific characteristic) and the particular energetic relationships found between crystals and chakras, related to their psycho-physical functions. Indeed some gems have the power to positively influence our magnetic field. 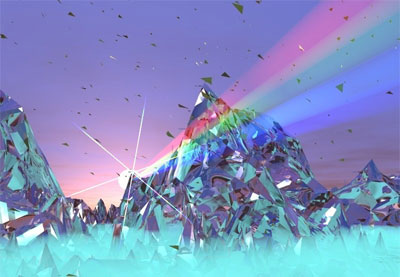 The very distinctiveness of crystals is its authentic balance in material, structure and energy. Its pure power is its capacity to re-order and re-balance every form of energy which passes through it.

This power concerns both the traditional energies which are usually included in modern physics (such as pressure, heat, electricity) and human electromagnetic centers and fields, well-known to be closer to a spiritual energy rather than a material one.

Besides the Diffuser has been conceived to spread the chromotherapy by the principles of the crystal therapy, thanks to a pair of specific glass which allows particular reflections and diffusions.

Indeed the Diffuser has a special natural crystal, fixed on a glass which reproduces the lights of the seven colours of chakras. This method fits perfectly the meditation related to chakras because it combines the potentialities both of the crystal and of the chromotherapy.

Furthermore, we already know the polarization of the light, but however it is opportune to mention it briefly.

The quartz is not only transparent to the ultraviolet light, but it is also birefringent, that is when a ray of light passes through the crystal in a different direction in relation with the optical axis, the ray itself is divided in two and polarized by the crystalline rock on two orthogonal planes.

This feature is easy to discover without any equipments, in particular in clear crystals with inclusions; in fact, owing to thedifferent refraction of the two fronts of the ray of light, its inclusions are blurred in certain directions because images are split (if the crystal is thick enough).

The quartz is also piezoelectric and piezoelectric, two different aspects of the same feature: the deformation of the network generates electricity, induced both by a mechanical and thermic action. This produces the crystal deformation through a dilation which can be differentiated depending on vectorial directions (when you cut a crystal, you can see clearly the emitted light even if you act with a blade in the water). If you heat the crystal, you develop positive electricity on the edges of the hexagon where there are the faces of the bipyramid and of the trapezohedron.

The quartz has also the peculiarity to rotate the light which crosses it parallely to the axis proportionally to the thickness of the crystal section of reference (concerning to the yellow light of sodium there will be a 20° rotation per millimetre) and with an opposite direction in conformity with its crystal rotation way.

Remarkable differences in the rotation of the light Wavelengths have been observed. Thanks to this feature, with the appropriate conditions and the utilisation of the white light (which includes all the spectrum), it is possible to obtain vivid inference colours, which make the original luminous spectrum more complex and unequalled!

Transparent Quartz has been always considered the crystal par Excelence. Its crystals are naturally generated in different shapes.

The most common configuration is a single termination with six faces which are united at the ends in order to model a point. 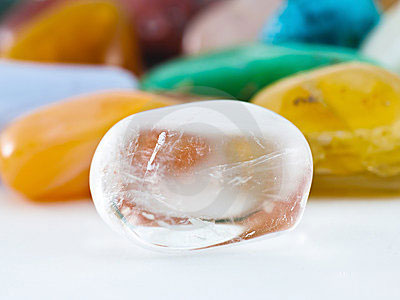 Its distinguishing marks are its clearness and brightness because the quartz energy frees and spurs the mind.

The Transparent QUartz is normally used to promote the mental and energetic balance, without forgetting the mental pureness.

This precious ally will render you more helpful towards other people, it will aid you to live with no deception or insincerity.

The high vibration of the Transparent Quartz helps to dispel mental fog and to bright the material darkness.

This crystal assistant cherishes the memory of the Earth experiences and it was considered by the ancients as a casket where secrets and knowledge are kept.

Maybe it is for some characteristics of this crystal that shamans (but even the ancient Romans, which shows the universality of certain beliefs) assert that the quartz is frozen light, which contains the spirit of a dead shaman. Indeed even what we call light is made of personal beings.

Besides after death, the most important shamans fly towards the Powers of Light, towards the People of Stars; and they come back on Earth to help us through the quartz crystals, as pieces of frozen light.

"We shamans work together with rock crystals to re-balance a harmed soul.

Therefore the Wellness Diffuser is also a crystal therapy Diffuser, which makes the most of the physical capacities of the birefringence of pure crystals to aid the application on chakras, by the modulation of the application spectrum of the chromatic group.